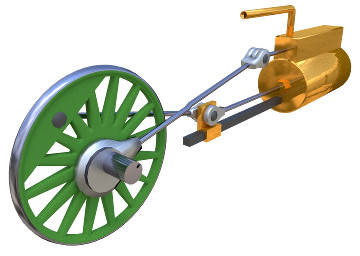 This model of steam engine was the most common in past. The energy of the steam pressure is converted into the rotation of the flywheel by the piston. The moving of the flywheel alters the position of the valve, which redirects a portion of steam in one of cylinder parts and opens the other part to emit exhaust steam.

In theory, such type of engines was mounted on locomotives. Now such devices can be found, perhaps, in museums or as a steam-punk attributes.

Other 3D models from Steam engines

© touch3d.net 2009-2022 All rights reserved.
When using materials from this site, place an active link https://touch3d.net as a source of information.